This website uses cookies essential for the function and operation of the site, including navigation and security. Google Analytics is the only non-essential third-party cookie currently running on the site, used to analyse site usage and performance.

OR FILL IN THE DETAILS AND WE’LL GET BACK

Flood defences are a critical concern across the UK.  Failure or lack of flood defences entirely can lead to catastrophic disruption to people’s lives, homes, businesses, infrastructure, travel & transport.  The cost of repairing the damage caused by floods can be immense.

This project sought to enhance flood defences to prevent damage and flooding on Ayrshire Coast Line rail route.  The rail tracks run along the coast just a few metres back from the sea wall.  In recent years, storms have caused waves to crash over the sea wall disrupting rail services and damaging infrastructure.

Engineers designed wave-shaped precast concrete units that could be fitted to the top of the existing sea wall to deflect waves back out to sea. 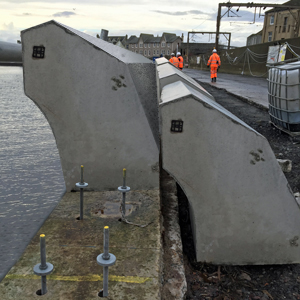 Simply fill in the form below and we’ll get back to you.